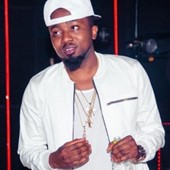 Panshak Zamani (born 23 October 1986), better known by his stage name Ice Prince, is a Nigerian hip hop recording artist and actor. He rose to fame after releasing "Oleku", one of Nigeria's most remixed songs of all time. He won the 2009 Hennessy Artistry Club Tour.His achievements include one BET Award, one Ghana Music Award, three The Headies Awards, two Nigeria Entertainment Awards and two Channel O Music Video Awards. Ice Prince is currently signed to Chocolate City. His debut studio album, Everybody Loves Ice Prince, was released in 2011. It was supported by the singles "Oleku", "Superstar", "Juju" and "Magician". In 2013, Ice Prince released Fire of Zamani as his second studio album. The album contained the singles "Aboki", "More", "Gimme Dat" and "I Swear". On 1 July 2015, Ice Prince was announced as the new Vice Chairman of Chocolate City. In 1999, he began writing Rap songs and started performing them at social events held at his school. It was not until 2001 that he began going to studios to record. In 2002, he got together with a couple of friends and formed a group called the "Ecomog Squad". They had few performances as a group and split a year later. In 2004, he connected with M.I, Jesse Jagz, Ruby, Lindsey, Eve, Taz, and together they became what is now known today as the "Loopy Crew". During an interview with Adeola Adeyemo, Ice Prince was asked to summarise his story. He said "I started out in Jos in a group called ECOMOG squad. We used to rap and sing together. The group split up after a few years and after that, I joined the choir in my church and started singing Tenor. That was about the time MI moved back to Nigeria and we became friends, we became family, we started living together, started making music together. I had a song that made it to Number 1 in Jos, that was when I started getting more attention. Then I got admitted into University of Jos to study Zoology but then I couldn't really continue because of some financial constraint at the time. In 2004, Ice Prince released his debut single "Extraordinary". "Rewind", another single he released, received radio airplay in Lagos and Abuja. It charted on Rhythm Fm's "Top 7 chart", NotJustOk's "Hype", Unilag FM, Zain Central Station, Inspiration Fm, Top FM’s "Top of the Morning", Cosmo FM's "Top Hits", Africa Connect Chat Show, and Kiss' "Top 20 Africa". Moreover, it charted at number 1 on Cool FM and Vision FM in Abuja.

Jos To The World Ice Prince

If I Tell You Ice Prince

A Verse For Jabba Ice Prince