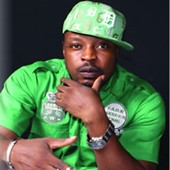 Eedris Abdulkareem, born Eedris Turayo Abdulkareem Ajenifuja, is a Nigerian hip hop artist. Born to a polygamous family in Kano, Nigeria, his father was from Ilesha, Osun State, and his mother was from Ogun State. Raised in Kano, he adopted Kano State as his state of origin. His father resides in Lagos, while his mother continues to reside in Kano. According to interviews, his decision to drop his patronymic surname has nothing to do with dislike for his father, but merely reflects his fondness for the name "Eedris Abdulkareem." His name, Abdulkareem, means "Servant of the generous God". Having left the Remedies amicably, Abdulkareem's solo debut album, P.A.S.S. ("Pains And Stress = Success") was released in 2002 on Kennis Music, and it was received well by hip-hop fans and music pundits alike, and it had tracks like "So Ligali" featuring Pasuma Wonder, "Come Back Home", and the first ever diss song by a Nigerian rapper, "Wackawickee MC's", where he took shots at Tony Tetuila, The Plantashun Boyz and Ruff Rugged and Raw. Released the same year (and also on Kennis Music Imprint) was the album titled Mr. Lecturer, which featured Abdulkareem's first video hit, the album's title track, which addressed the problem of students using money and sex to solicit higher grades in Nigerian colleges and universities, as well as male lecturers exploiting female students and requesting sex and money in exchange for good grades. This album further increased Eedris Abdulkareem's popularity, and is cited in some quarters as the best album which Eedris Abdulkareem ever released, as well as his highest selling album. In 2004, Abdulkareem's third album, Jaga Jaga, appeared on Kennis. Its title track, which laments the corruption and suffering in Nigeria, was banned from radio airplay by Nigerian President Olusegun Obasanjo in a televised address, although it continued to be played in nightclubs. The album was released to critical acclaim, and the cover of the album was designed by Ghariokwu Lemi, who designed most of Fela Kuti's classic album covers. Abdulkareem was also voted alongside great personalities like Dora Akunyili, Pat Utomi and others by millions of Nigerians to represent Nigeria and carry the Olympic torch relay. Also in 2004, Abdulkareem came to international attention as a result of a scuffle with American rapper 50 Cent on board an airplane at Murtala Mohammed International Airport in Lagos. By all accounts, Abdulkareem had tried to occupy 50 Cent's seat, resulting in a fight between Abdulkareem, his friends, and 50 Cent's bodyguards. One of Abdulkareem's associates was hospitalised as a result, and 50 Cent returned to the United States, refusing to appear at a scheduled concert in Port Harcourt. Abdulkareem got married after briefly dating his then girlfriend Yetunde, and they both have 3 children. In November 2005, Abdulkareem launched his own record label, Lakreem Music, and released his fourth album, Letter to Mr. President. The album's title track addressed Obasanjo's criticisms of "Jaga Jaga"; the album also featured "Flash Up Unu Lighter", a tribute to Obasanjo's wife, Stella, who died while undergoing surgery in Spain, and the victims of the Bellview Airlines crash of October 2005. Abdulkareem is the founder of Lakreem Entertainment as well as the Eedris Abdulkareem Foundation, a fundraising organization dedicated to fighting the spread of HIV and AIDS in Sub-Saharan Africa in conjunction with the Pat Utomi Foundation. Eedris has been releasing numerous singles in preparation for his yet untitled album, among which are "Wonkere" featuring Fatai Rolling Dollar, "Shekere" featuring Vector tha Viper, and "FELA" featuring Femi Kuti. He also released a sequel to his 2004 hit "Jaga Jaga" in January 2012 during the Occupy Nigeria protest and also took a shot at Nigerian pop sensation D'banj, asserting that he is dining with the government that is doing nothing to change the living condition of the ordinary Nigerians. He also released "Whooze You" featuring VTEK, which take shots at Mavin Records boss Don Jazzy. The track created a little tension in the Nigerian hip hop scene in 2013. He was also featured on numerous tracks by other artist, among which is "Bad Guy Baller" featuring Mode 9 and VTEK and a track by Oba Mmega. In 2013 the former president Olusegun Obasanjo took a swipe at Eedris, which inspired him to make another track aimed at the former president. Eedris also announced on his Twitter page in 2014 that he will be releasing a track titled "Godfather and Godson" produced by super producer SOSOBEAT after the former president wrote a letter to the current president, Goodluck Jonathan. He has mentioned in his musics and interviews that Fela is his hero and inspiration. Eedris is preparing for the release of his untitled seventh studio album. Soon to drop are singles like; Dem no understand, IDPs, even more.

King Is Back Eedris Abdulkareem