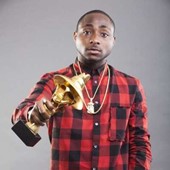 David Adeleke popularly known as Davido is a Nigerian recording artist, performer, and record producer. In 2011, he burst unto the scene with a mega-hit single, which he co-produced and released 'Dami Duro', which was a dance hall favourite all over Africa and the African diaspora. His debut album 'Omo Baba Olowo', released in 2012, contained the singles 'Back When' featuring Naeto C, 'Dami Duro', 'All of You', 'Overseas' featuring Sina Rambo, 'Ekuro', 'Gbon Gbon', and 'Feel Alright' featuring Ice Prince. in 2013, he released the songs 'Gobe', 'Skelewu', and 'Aye,' all of which became hits. These songs and more were said to be leading to a sophomore album scheduled for release at the end of 2014. The release date has been shifted several times and the album is now expected in 2016. Other singles have been released including 'Dodo' (2015) and 'Fans Mi' (featuring Meek Mill). Davido's sophomore is named 'The Baddest'. Alongside his elder brother Adewale Adeleke, Davido is the co-owner of HKN Music and has produced several artistes, including Naeto C, Skales, Tiwa Savage, and Sauce Kid. He has won several awards including the Kora, Channel O, and Nigeria Music award. He has also won awards at the Headies, the Nigeria Entertainment Awards, and the Dynamix All Youth Awards. In 2015, Davido won the MTV Africa Music Awards and was nominated for the All Africa Music Awards and the MOBO Awards.

What You Want Davido

All Of You Davido