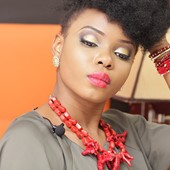 Yemi Eberechi Alade (born 13 March 1989), simply known as Yemi Alade, is a Nigerian afropop singer. She gained prominence after winning the Peak Talent Show in 2009, and is best known for her hit single "Johnny". Alade made her musical debut in an all-girl group called Noty Spices in 2005, but her music became widely popular after she won the Peak Talent Show in 2009. She later released her first single "Fimisile" under the Jus' Kiddin' label. In 2012, she signed onto the music label, Effyzzie Music Group, and released her single "Ghen Ghen Love". In July 2013, Alade released the video for her romantic afro-R&B song "Bamboo", produced by Fliptyce. "Bamboo" went on to be a moderate hit and a popular wedding song. In the last quarter of 2013, she broke records when her most recent hit single, "Johnny", produced by Selebobo, was leaked on the internet. The song became an international smash hit as it dominated music charts in Tanzania, Kenya, Ghana, South Africa, Liberia, Uganda, Zimbabwe, and the United Kingdom, among others. It has been listed as one of the best songs of 2013, despite the fact that it was released towards the end of the year and without a music video. Alade has been featured on the covers of several magazines and performed around the world, sharing the stage and songs with Mary J. Blige, Shina Peters, M.I, Wizkid, Becca, May D, Waje and Yemi Sax. She also headlined the Super Diva’s Nite at the 2013 Calabar Festival, and opened for the 2013 Headies Awards (popularly referred to as the "Nigerian Grammys"). In 2014, Alade was featured on Yung6ix’s track "Lights", as well as on a remix of "Sebiwo" by Beninese afropop star Lace. Alade teamed up with award-winning cinematographer Clarence Peters to create a music video for "Johnny", which was released in March 2014 to critical acclaim and now has more than 32 million views on YouTube, as of December 2015. Alade joined M.I, Waje, Timi Dakolo, and Burna Boy in singing the theme song for Port Harcourt, the UNESCO 2014 World Book Capital, as part of a project urging young people to read and stay in school. Shortly after that, Alade released a new single entitled "Tangerine", featuring Selebobo; the critically acclaimed track charted across Africa. She appeared as a guest artist on Falz’s debut album. She released her debut album, King of Queens, on 2 October 2014, and then went on tour.Yemi Alade is currently touring and working on her second studio album titled “Mama Africa”, slated to be released in March of 2016.

How I Feel Yemi Alade