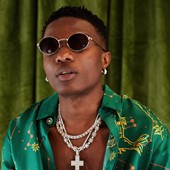 Ayodeji Ibrahim Balogun (born 16 July 1990), better known by his stage name Wizkid (sometimes stylised as WizKid), is a Nigerian recording artist, songwriter and performer. He started his musical career at age 11, releasing a collaborative album with Glorious Five entitled Lil Prinz (2001). In 2009, he signed a record deal with Banky W.'s imprint Empire Mates Entertainment. He rose to prominence in 2010 with the release of the song "Holla at Your Boy" from his debut studio album, Superstar (2011). "Tease Me/Bad Guys", "Don't Dull", Gidi Girl, "Love My Baby", "Pakurumo" and "Oluwa Lo Ni" were also released as singles from the Superstar album. Wizkid's self-titled second studio album, Ayo (2014), was preceded by the singles "Jaiye Jaiye", "On Top Your Matter", "One Question", "Joy", "Bombay" and "Show You The Money". In addition to his solo work, Wizkid has collaborated with several artists and was featured on the hits "Girl" (with Bracket), "Fine Lady" (with Lynxxx), "Sexy Mama" (with Iyanya), "Slow Down" (with R2Bees), "The Matter" (with Maleek Berry), "Pull Over" (with KCee) and "Bad Girl" (with Jesse Jagz). His work and contribution to the Nigerian Music Industry has earned him several achievements, including a BET Award, a MOBO Award, five The Headies Awards, two Channel O Music Video Awards, four Nigeria Entertainment Awards, two Ghana Music Awards, two Dynamix All Youth Awards, two City People Entertainment Awards, and a Future Award. In addition, he has been nominated three times at the MTV Europe Music Awards as well as four times at the World Music Awards. He was ranked 5th on Forbes and Channel O's 2013 list of the Top 10 Richest/Bankable African Artists. In February 2014, Wizkid became the first ever Nigerian musician to have over 1 million followers on Twitter.

Sounds From The Other Side Wizkid

Made In Lagos" Wizkid

Made In Lagos Album Wizkid