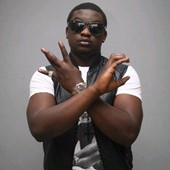 Wande Coal (born 18 October 1985), born as Oluwatobi Wande Ojosipe in Lagos Island, Lagos state, Nigeria, to Chief Ibukun Olufunto and Mrs Omolara Oluwayemisi Ojosipe. The first of two children, Wande had his primary school education at Staff Nursery and Ijaniki Primary School, and his secondary education in Federal Government College Lagos in Lagos State, and went on to University of Lagos (Unilag), Lagos State, where he studied Curriculum Studies. Wande, most great musicians started singing in the teenage choir at his church. He got his break in the Nigerian entertainment industry as a dancer. He continued improving on his vocals skills and got signed to Don Jazzy's Mo'hits records in 2006. He featured on D'banj's Rundown/Funk you up album on singles such as "Loke", "tonosibe" and "why me". Being signed to Mo' Hits records he is also a member of the Mo' Hits allstars and played a major role in the released CV (Curriculum Vitae) album. His first single of the CV album, "Ololufe", has been described as one of the greatest love songs ever written by a Nigerian. Wande Coal later released his debut album 'Mushin to Mo'Hits which was widely received across Nigeria, UK and the USA. Wande Coal has also recorded tracks with other Nigerian artists including ikechukwu, Naeto C, Dr SID, D'Prince, Wizkid and many more. In 2012 following a fallout between record label Executives Don Jazzy and D'banj, Wande Coal, Dr SID and D'Prince signed on to Don Jazzy's new Record Label Mavin Records with the addition of Tiwa Savage from 323 entertainment acting as the first lady of mavin records. Wande Coal left Mavin Records in 2013. In October 2013, he released a single called "Baby Face". After a very long self-imposed hiatus, Wande Coal dropped his sophomore album which is arguably one of Nigeria's most anticipated album of all time. He got a lot of buzz and the hype surrounding the release was spontaneous. Most reviews of the album placed him on a slightly above average scale. Birth Name: Oluwatobi Wande Ojosipe

Oh No No Wande Coal

So Mi So Wande Coal