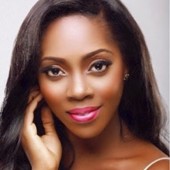 Tiwatope Savage-Balogun (born 5 February 1980), better known by her stage name Tiwa Savage, is a Nigerian singer-songwriter, recording artist, performer and actress. She is currently signed to Sony/ATV Music Publishing and Mavin Records. She co-wrote the track "Collard Greens & Cornbread" off Fantasia Barrino's Grammy-nominated album Back to Me. Savage was featured on Solar Plexus, a compilation album that was released a day after the establishment of Mavin Records. On 3 July 2013, she released her debut studio album Once Upon a Time. Savage sings in English and Yoruba. As a singer, her achievements include one MTV Africa Music Award, two The Headies Awards, one Channel O Music Video Award, one Nigeria Music Video Award, and two City People Entertainment Awards, among others. Tiwa Savage was born in Ikeja, the capital of Lagos State. Her family relocated to London when she was 11 years old. While attending high school, she was a trombone player for her school's orchestra band. Savage had a healthy upbringing; she grew up in a multicultural setting due to her migration from Nigeria to the United Kingdom, and from the United Kingdom to the United States. After graduating with a degree in Business administration from the University of Kent, Savage started working at The Royal Bank of Scotland. She did backup vocals for George Michael at the age of 16, and lent vocals to other musicians such as Mary J. Blige,Chaka Khan, Blu Cantrell, Emma Bunton, Kelly Clarkson, Andrea Bocelli, and Ms. Dynamite, amongst others. Furthermore, she has performed on stage with Sting, 50 Cent, The Black Eyed Peas, Eminem, Robbie Williams and Destiny's Child, to name a few. Savage enrolled at Berklee College of Music and graduated with a degree in professional music at the age of 27. Savage started recording her debut studio album in 2010. She networked with Berklee alumni Keith Harris, Derek Pate, Scott Coleman, Radar Ellis, and Darien Dorsey while attending the aforementioned music school. During her interview with Brenda Pike, she said she collaborated with producers Chuck Harmony, Warren "Oak" Felder, and So Sick (Da Grin), among others. Moreover, she said that her debut album will include records in her native tongue. Savage was featured on Flavour N'abania's "Oyi Remix" in 2012. Prior to collaborating with Flavour, she recorded her own version of the song. In celebration of Nigeria's 52nd independence, Savage performed her rendition of "Arise, O Compatriots" for Ndani Sessions. In November 2012, Savage collaborated with Waje, Praiz, Timi Dakolo and Pamela Egoh on the Ovation Red Carol Theme Song "Higher". In May 2013, Savage held an album listening party at the Wheat Baker Hotel in Ikoyi. She revealed the entire tracklist of the album and announced Iceberg Slim, Sarkodie and General Pype as featured acts.] On 3 July 2013, she released her long awaited debut album, Once Upon a Time, to the Nigerian public. The album was released on iTunes a day before the Nigerian release. Savage named the album Once Upon a Time in order to portray the positive stories about her life. She said she wanted to motivate other upcoming artists by telling them that, once upon a time, she was a little girl in Isale Eko who dreamt of being a star. The album includes political songs like "Middle Passage" which is about the struggles of African men in a foreign country On 31 January 2014, Savage released "Love in Yellow", a promotional single meant to celebrate Valentine's Day 2014. The song, which has a retro R&B and Funk sound, was produced by Spellz. Savage was featured on Reekado Banks's 2014 single "Turn It Up", which was produced by Don Jazzy. On 1 May 2014, Mavin Records released "Dorobucci" featuring Savage, Don Jazzy, Dr SID, D'Prince, Reekado Banks, Korede Bello and Di'Ja. The song, which was produced by Don Jazzy, is the record label's first collaborative release since the release of the Solar Plexus album in 2012. On 19 May 2014, Foston Musik premiered Patoranking's "Girlie 'O' Remix" featuring Savage. The song was produced by WizzyPro. The music video for the song was shot and directed in London by Moe Musa. It was uploaded onto Patroranking's Vevo account on 20 May 2014, at a total length of 4 minutes and 7 seconds. On 7 June 2014, Savage performed at the 2014 MTV Africa Music Awards alongside Miguel, Flavour N'abania, Davido,Mafikizolo, Uhuru, Oskido and Professor. On 27 May 2014, 323 Entertainment and Mavin Records released the music video for "Wanted", a song from the Once Upon a Time album. It was directed by Moe Musa in London. The release of the video prompted a huge public backlash across various social networking sites, including Facebook, Twitter, and YouTube. In June 2014, Savage collaborated with Mi Casa, Lola Rae, Sarkodie, Diamond Platnumz, and Davido on a song for DSTV's Africa Rising campaign, which was designed to inspire Africans to partake in community-based social investment projects. The music video for the song, released on 24 June 2014, was shot and directed by South African production house Callback Dream. The aforementioned artists performed the song at the Africa Rising launch ceremony in Mauritius. Tiwa Savage is married to Tunji "Tee Billz" Balogun. On 23 November 2013, the couple held their traditional marriage at the Ark in Lekki. The couple's white wedding was held on 26 April 2014, at the Armani Hotel in Dubai. On 1 January 2015, Savage and her husband, Tunji "Tee Billz" Balogun, announced that they were expecting their first child together. On 22 July 2015, Tiwa Savage gave birth to her son Jamil Balogun. On 28 April 2016, Tunji "Tee Billz" Balogun, in a series of social media posts, accused his wife of infidelity as well as her mother of witchcraft. In a 45-minute interview conducted by Thisday newspaper and Pulse Nigeria, Tiwa Savage extensively addressed her husband's lengthy social media posts regarding their marriage. She debunked her husband's infidelity claims and accused him of financial recklessness, drug addiction, and abandonment. Moreover, she said that her marriage to him is over.

Once Upon A Time Tiwa Savage

All Over Tiwa Savage