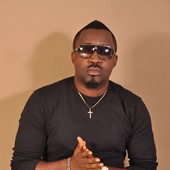 Okechukwu Edwards Ukeje, better known by his stage name Mr Raw (formerly Dat N.I.G.G.A. Raw), is a rapper from Southeastern Nigeria. He is often regarded as one of the pioneers of Igbo rap, a genre that now appeals to a broad, mainstream audience. Born and raised in Enugu, he gained prominence during the early 2000s rapping in the Igbo language and Pidgin English. Raw's debut studio album, Right & Wrong, was released on 7 August 2005; it experienced commercial success and helped propel him to the next level in his career. A second album Everything Remains Raw followed in 2007, paving the way for future performers in the genre. His third studio album End of Discussion was released in October 2010. The album yielded the hit song "O Chukwu" whose music video won Best Afro Hip Hop Video at the NMVA Awards that year. Despite his fame as a solo artist, Raw has collaborated with numerous other musical artists including Flavour N'abania, Duncan Mighty, Phyno, Illbliss, 2Face, M-Josh and Slow Dog.