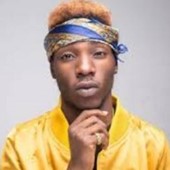 Shokoya Oluwasegunfunmi David (born May 18, 1995) best known by his stage name Davolee, is a Nigerian singer, rapper and songwriter currently signed to YBNL Nation record label, an independent record label founded by Olamide in 2012. Davolee was signed to YBNL record label on November 12, 2016. The young rapper, Shokoya Oluwasegunfunmi David best known as Davolee is a street rapper and a native of Ogun State who is mostly known for his viral cover of ‘Panda’, a hit single by American artiste, Desiigner. Before joining YBNL, Davolee had it rough as he once hawked pure water on the streets of Mushin, Lagos and has been struggling to get attention with his songs before his path crossed with Olamide. Davolee was signed to YBNL record label on November 12, 2016. Joining YBNL Nation record label in November 2016, the announcement was made via Olamide’s Facebook and Instagram accounts simultaneously. “Artiste ‘Davolee’ new YBNL boy… new song… Festival Bar…Davolee Ileka,” Olamide wrote. “Love to every ghetto kid out there trying to make it out of the hood. Iyanu mashele.. Eminidavolee God bless u bro. Gang gang get ready for the hate, the criticism, the madness , the love, the fame, the cameras, and the lights .. sharpen your sword soldier let’s sling throats. We are all we have. Uprising of the ghetto youth dem! YBNL,”the rapper further wrote. Some of Davolee selected songs include; Panda (cover) Festival Bar Kilode Ajepako Python For The Hood ft. Olumix On 10 February 2017, Davolee released the music video of his hit single titled “Festival Bar”. The video for “Festival Bar” was directed by Moe Musa. On March 19 March 2017, Davolee released a hit single titled “For The Hood” which featured Olumix.